How the Carbon Cycle Helps Sustain Life on Earth

Carbon is an important part of human life. We’re primarily made of carbon, we eat carbon, and our economies, homes, and transportation are all built on carbon. Carbon moves throughout the planet in a process called the global carbon cycle, which is an essential part of our planet's overall health. However, as vital as carbon is to the continuation of our civilization, it also plays a huge role in one of the biggest threats facing our planet: global warming and climate change.

With this article, we’ll define the carbon cycle, explain how it works and how the Earth uses it to regulate the levels of greenhouse gasses in the atmosphere, and how human activities are unbalancing this global process.

The carbon cycle is a natural process that moves carbon compounds throughout different deposits, or reservoirs, in the environment. (These reservoirs include the biosphere, pedosphere, geosphere, hydrosphere, and atmosphere.) Carbon atoms naturally cycle through reservoirs, since all life on Earth uses carbon compounds for basic biological processes.

The carbon cycle occurs because Earth is a closed system, meaning that the total amount of carbon never changes. What does change is how much carbon resides in each of those reservoirs at any one time. While the largest deposits of carbon are stored inside rocks and sediment that exist below Earth's surface, the oceans and the atmosphere also hold carbon. From these sources, plants and animal life can draw on carbon to perform biological processes.

How Does the Carbon Cycle Work?

There are four natural steps that carbon can cycle through as it visits different reservoirs:

Those four steps of the carbon cycle work in tandem to move carbon throughout the environment. Just keep in mind that carbon doesn’t have to move through every step, since the carbon cycle is more of a system than a single process.

To help explain this process in more detail, we put together this carbon cycle diagram: 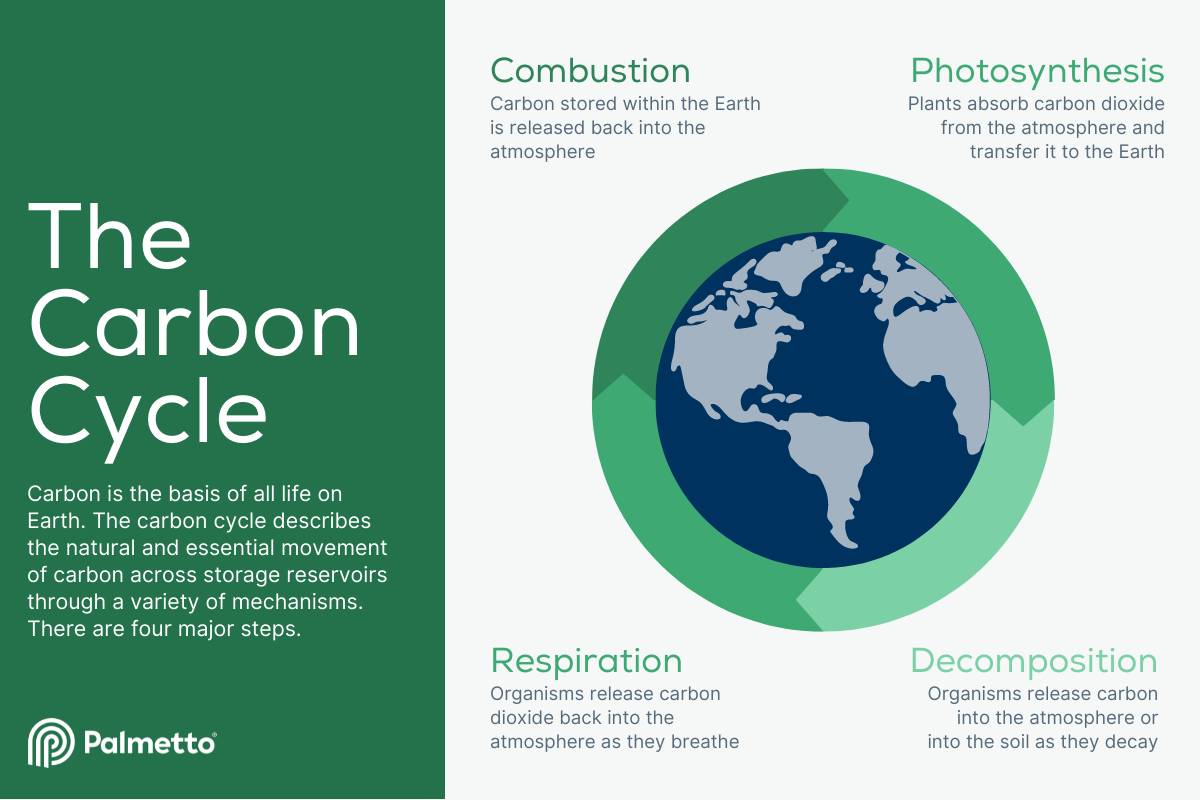 The fast cycle refers to the carbon cycle steps through which carbon can quickly cycle through the environment, and can be measured in a lifespan. Photosynthesis and respiration are the two steps associated with the fast cycle. This carbon is being processed through the food chain, with plants as the driving force.

Because of the swift nature of biological processes, the compounds are rapidly moved between plant matter, animals, and the atmosphere. Very little carbon is moved during any given spin through the fast cycle, but due to the speed of the process, the overall amount processed each year is greater than in the slow cycle.

The exchange of carbon compounds between the atmosphere and Earth (where it is stored in the ocean, rocks, and soil) is called the slow carbon cycle, and it can take millions of years. This process mainly involves the decomposition and combustion parts of the carbon cycle steps.

While a single trip moves more carbon than its speedy sibling, the slow cycle is so gradual that it processes less carbon per year than the fast cycle.

Why The Carbon Cycle Is Important

Having some greenhouse gasses is crucial to keeping our planet at a habitable temperature. Without a warm atmosphere, Earth would be far too cold for life to thrive. However, the accumulation of too many greenhouse gasses can lead to global warming. This causes overall temperatures to rise, and extreme weather events to occur.

Human Impact On The Carbon Cycle

Human actions have led to far higher carbon levels in the atmosphere than ever previously recorded. Using fossil fuels for energy and fuel is one of the biggest reasons so much carbon dioxide is now in the atmosphere.

While the carbon cycle can remove some of that carbon dioxide, it can only remove so much carbon from the atmosphere at a time. When we release too much, a buildup of greenhouse gasses occurs, which leads to global warming, extreme weather events, and other ecological and environmental crises.

Some examples of ways humans are creating greenhouse gases and overwhelming the carbon cycle include:

A properly functioning carbon cycle is crucial to maintaining a healthy planet and healthy life for everyone that inhabits it. The Earth must have a way to regularly distribute carbon throughout our environment to preserve the balance between plant, animal, and insect life. However, human activities have altered the cycle, funneling millions of pounds of excess carbon compounds into the atmosphere, especially in the form of carbon dioxide, a greenhouse gas.

The good news is that you can take steps to lower your carbon footprint. By making more environmentally-conscious decisions, you can reduce your contribution to growing emissions.

One of the best ways to lower your impact on the carbon cycle is to install solar panels on your home. By using renewable energy instead of fossil fuels, you can help slow global warming, and you could even lower your monthly energy bills in the process. Palmetto can help you take the first steps towards the installation of a solar power system on your home, so check out our Free Solar Design and Savings Estimate tool to get started today!

Get the latest insights on solar, clean energy, climate change, and sustainable living—delivered right to your inbox every month.

Palmetto is your go-to resource for news, updates, and questions. Knowledge is power. Invest with confidence.

Why You Should Recycle

The environmental and economic benefits of recycling, what materials you can recycle, and how each person can do their part in preserving our environment.

What Is Global Warming?

33 Essential Tips to Protect Your Home from Storm Damage

Protect your home and family from storm damage from hurricanes, wildfires, and more with proactive tips, preventative measures, and an emergency plan.