How to Explain Utility Bills to Solar Customers One of the main value propositions for going solar is saving money. But how exactly does solar help a customer save money? To answer this question, you need to understand a homeowner's current situation with their utility company and how they are being billed for power. Your goal is to get them thinking about their utility bills, and then help them realize that they could be making smarter decisions about their spending and energy use by going solar.

Most people pay their electric bills without thinking twice. They simply look at the amount owed, maybe comment on its size, pay the bill without too many questions, and then repeat when next month’s bill arrives. They don’t try to understand what they are getting charged for and why.

If you hope to convince people that going solar is the right decision, you must help them understand two essential pieces of information:

The customer’s rate plan directly impacts how much they will pay for the electricity they use in their home. That electricity usage is measured in kilowatt-hours (kWh). To put it simply, a kWh (kilowatt-hour) is that unit of energy that measures how much energy homeowners have consumed in a given billing period.

There are four basic types of electricity rate plans:

Fixed-rate plans: Homeowners get charged the same rate for every kWh consumed for their entire contract term. Variable-rate plans: Homeowners can get charged a different rate each month for every kWh consumed. Time-of-use plans: The price per kWh changes depending on the time of day, and a more expensive rate is typically charged during peak hours. 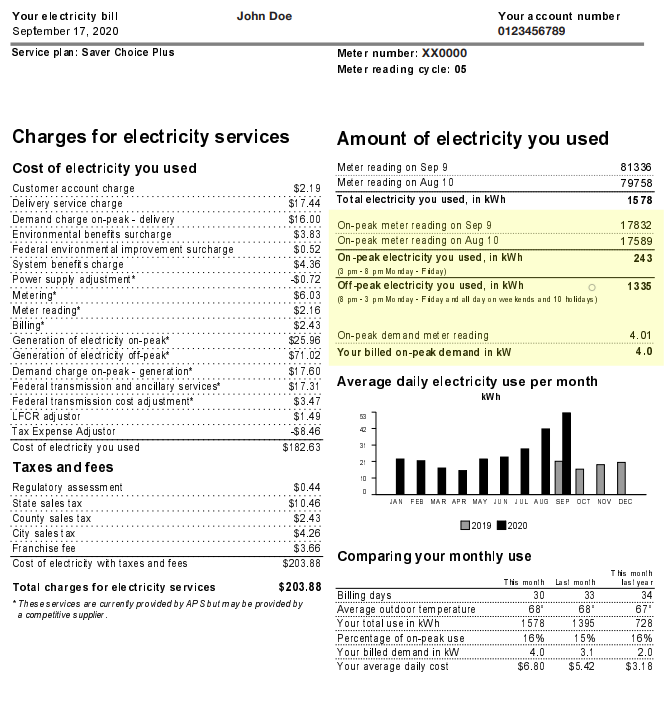 Tiered-rate plans: Customers are billed in tiers based on how much energy is consumed, and homeowners will typically pay a higher rate per kWh for using more energy. The rate plan determines what the customer will be charged depending on when and how they use electricity. This could mean that customers may pay a different amount each month even if they use the same amount of energy.

The energy charge tells customers how much they are being charged for the amount of electricity they have consumed in kWh. This area of the bill will show you the price per kWh the utility is charging them based on their rate plan. The basic equation is simple:

If you used 1,000 kWh used in one billing cycle and your rate plan charged you 10 cents per kWh, your energy charge would be $100. 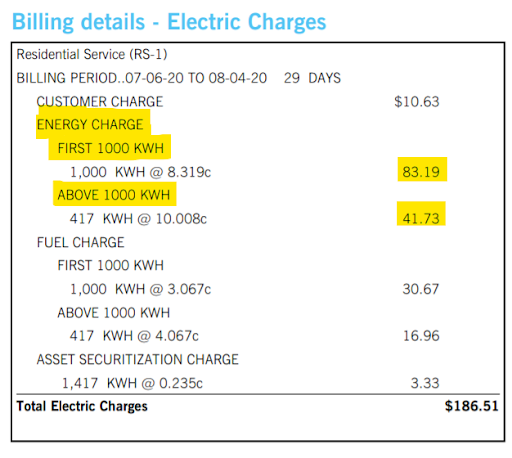 Customers will also see other charges on their electric bills. While the names and amounts of these charges vary by utility, they generally include a base charge and delivery charge. You must tell customers about these charges, as they are assessed in some form by every utility company—even after going solar.

Base Charge: Every utility has a base charge for being connected to the grid. It's usually the first one listed on any given bill. This charge doesn’t depend on how much energy is consumed and will usually remain a flat fee. The amount of the charge varies by utility, and the homeowner will still see this charge in their electric bill, even after going solar.

Customers must understand: Even if their home used 0 kWh of electricity from the utility grid in a billing cycle, the customer would still receive an electricity bill for this charge.

Delivery Charge: This charge represents the cost of transmitting and delivering electricity to the customer’s home, including maintenance for transformers, powerlines, telephone poles, electricity meters, and other aspects of the energy infrastructure. The amount of the delivery charge typically depends on the kWh of energy the home consumes, so a home that uses more energy will have a higher delivery charge.

Helping a customer understand the charges on their electricity bill is a vital step in teaching them how going solar will help them save money. Make sure you take the time to go over their bill with them, point out all the areas in which they could be saving money, and set proper expectations.

Palmetto is your go-to resource for news, updates, and questions. Knowledge is power. Invest with confidence.

If you’re considering going solar in California, learn what your options are as the policy for crediting excess solar energy is changing.

Solar leasing definition, how a solar lease works, the pros and cons of leasing solar, and the difference between a lease and Power Purchase Agreement (PPA).

Smart Home 101: Introduction and How It Works

How to design and build a smart home system, the benefits and drawbacks of smart home technology, and how to create a smart home ecosystem that will save money.